This final would be a rematch from three years prior.

The Calgary Flames would square off again with the Montreal Canadiensfor the Stanley Cup, looking to avenge their defeat in 1986.

It would be a meeting of the regular season’s top teams, the number one seeds from the formerly-named Campbell conference and Prince of Wales conference.

Montreal, led by rookie coach Pat Burns, had lost only three games in the three playoff series leading up to the final.

The Flames did not have as smooth a ride to the finals. Terry Crisp, in his second season as coach, and his team would battle Vancouver to seven games in the first round.

The Flames would then crush Wayne Gretzky and the Los Angeles Kings in a sweep, and take Chicago in five to get to the Cup final.

The series would be a defensive battle, with stellar goaltending coming from both Vernon and Montreal’s Patrick Roy. These longtime adversaries would split the first two games in Calgary, with the Flames winning game one 3-2 and Montreal taking the second game 4-2.

Moving to the hallowed Montreal Forum, Ryan Walter would score for the Canadiens at 18:08 of the second overtime, giving them a 4-3 game three win before the Flames won game four, 4-2.

The series returned to the Saddledome with the home team winning the fifth game 3-2.

Going back to the Habs’ home turf, the Flames maintained a 3-2 advantage.

In the first period, Colin Patterson capitalized on a shot that was deflected off the Canadiens’ Chris Chelios, and snapped the puck past a surprised Roy at 18:51 of the first period.

Claude Lemieux responded for Montreal, at 1:23 of the second period, when his blast from just inside the blue line handcuffed Vernon and trickled over the goal line.

The Flames co-captain, Lanny MacDonald, scored his only goal of the playoffs in the second period at 4:24. Coming out of the penalty box and into a four man rush, MacDonald took a pass from Joe Nieuwendyk to beat Roy on the glove side.

Despite each allowing a soft goal, both goaltenders played at the All-Star level into the third period. 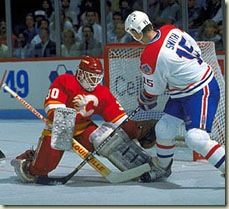 The turning point came for Calgary in the third period, when Russ Courtnall took a boarding after he ran Vernon over behind the net.

The Montreal bench rejected this penalty, arguing that Vernon was clearly away from his crease, and was therefore a fair and open target.

On the power-play, Doug Gilmour cashed his own rebound past a confused Roy, scoring at 11:02 in the third.

Pat Burns was seen clapping his hands after the goal, a sarcastic “thanks” to referee Denis Morel for his call against Courtnall.

Rick Green would respond for Montreal at 11:53 on a screen shot that clearly showed Lemieux interfere with Vernon.

An interesting event occurs at the 15:51 mark of the period.

With the Canadiens still trailing and on the attack, the Flames’ Al MacInnis scoops the puck with his glove and stops the play in the Calgary end.

Being on the opposite side, referee Morel can’t see what occurred so no delay of game penalty is called. MacInnis carries his “trophy” to the Flames bench, during the stoppage in play, and flips it to a trainer.

With just over a minute to play in the third period, Gilmour would score on the empty net, securing the first ever Stanley Cup for the Calgary Flames.

Ironically, this moment was equally significant for Montreal. Up until this moment, the Canadiens had never lost a Cup clinching game at home in the entire history of their storied franchise. Montreal fans gave a standing ovation for the Flames and remained in their seats to watch as the visiting team paraded the Stanley Cup around the Forum ice. 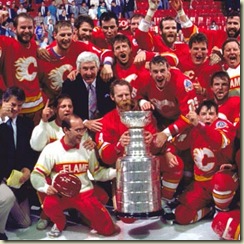 Though he didn’t score in the final game, MacInnis had five goals (two game winners) with his booming slapshot in the series. 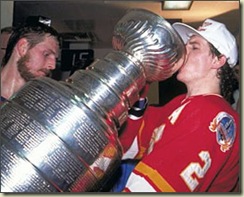 His 31 points in the playoffs, including a 17-game point streak, would earn him the Conn Smythe Trophy as playoff MVP.

MacInnis became the first defenceman to lead the playoffs in scoring. 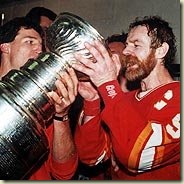 For Lanny MacDonald, it was an exclamation point on a Hall of Fame career.

Having capped his regular season career with an even 500 career goals and 1006 points, his final goal in the NHL was to have his name forever etched on the side of the Stanley Cup.

“I scored my first goal ever in the National Hockey League in the Montreal Forum. And I scored my last goal in my final game, again, in the Montreal Forum. I was part of the on-ice lineup for that winning game and we were the only team other than the Canadiens ever to win the Stanley Cup on Forum ice. All those things added up to me thinking, ‘Boy, it’s a sign! It’s time I was outta here.’ What a great way to go!

“To come back and eventually win the Cup playing for a team close to your hometown (Hanna, Alberta), wow! It doesn’t get much better than that.”

This Stanley Cup final would also mark the last time that two Canadian teams have faced off.

Check out this next place for more real estate opportunities..

Nice article on the porwerfull bluejays team of the early 90′s..

In the year of 1977, history was made in Toronto,Canada. After the Montreal Expos, The Toronto Blue Jays were the 2nd and only team in Canadian history to be expanded into Major League baseball.Fans in Toronto were skeptical of their new baseball team, But on April 7th,1977, Toronto played their first ever game in MLB against powerhouse Chicago White Sox in Toronto at the Exhibition Stadium.The Blue Jays won the game 9-5 after Doug Ault hit 2 home runs.But this game was more remembered because of a minor snowstorm that happend before the game and the pitch was covered with snow. Toronto eventually finished in last place in the AL.

First game at Exhibition StadiumAfter almost over a decade, Toronto continued to struggle to compete in the play-offs and make it to the World Series even though they had big all star players such ass Jesse Barfield,George Bell and Dave Stieb the most they could win was a division title.That all changed very soon. in the late 80′s The Blue jays were heading into a new era. They signed young talented players like…Tony Fernandez,LLyod Moseby and Fred McGriff.

During the late 80′s players from the club and around the league were complaining about always playing in bad weather conditions in Toronto’s Exhibition Stadium(which was demolished in 1999) and wanted the club to build another stadium. So on June 3rd,1989, history was made yet again. The Skydome stadium was born and is the first stadium in history of baseball to have a fully re-tractable motorized roof, as well with rows of hotels attached to it overlooking the field.And if that wasn’t enough, the stadium was built right next to the most tallest free-structure in the world which was the CN tower. The Toronto Blue Jays finally had a proper home stadium and it was recognized all over North America.

The early 90′s was the greatest era for Canadian baseball and Toronto Blue Jays history. In 1992, The Toronto Blue became the first Canadian team ever to win the World series against NL’s Atlanta Braves with All star players such as Joe carter,Roberto Alomar,Devon White,Dave Stieb and Tom “The Terminator” Henke. But it didnt end there for Toronto, after the following season, 7 Toronto players made it to the All star game including infamous head coach ‘Cito Gaston’ for the American League team. after the All-star break Toronto came back from a 8 game losing streak and won the east division taking it away from former 1st place team the ‘New York Yankees’ which qualified Toronto to get in the play-offs for a 2nd straight season.

After the Jays claimed another AL pennant, they have reached to the World series 2 straight seasons in a row. And after a gritty 5 game performance by both the Toronto Blue Jays and the Philadelphia Phillies. The Blue Jays now led the series 3-2 going into the next game in Toronto which could make them be the first team to win on Canadian soil. On October 23,1993, The SkyDome was sold out and rammed with Blue jays fans. It was the 9th inning, Joe Carter is at the plate with 2 strikes,2 balls, 1 out with 3 runners on base and the Blue jays were down 6-5. closer, Mitch Williams threw a fast ball inside and Joe carter swung and the baseball was hit hard and deep to left field and over the wall!A walk-off Home run!!! Joe Carter ran around the bases jumping with joy! the Blue jays were once again world Champions!! And this is one of the infamous play by play announcing by legend Announcer, Tom Cheeks.

“A swing, and a belt! Left field! Way back! Blue Jays win it! The Blue Jays are World Series champions as Joe Carter hits a three-run home run in the ninth inning and the Blue Jays have repeated as World Series Champions! Touch ‘em all, Joe, you’ll never hit a bigger home run in your life!”

Joe Carter rounding the bases after his historic Walk-off home run at SkyDome.

Yes, it was all true for the Blue jays, they were back 2 Back world series champions! people in downtown Toronto were partying. ( I remember it being so packed that my back was touching the wall) it was crazy. yes ladies and Gentlemen,this was one of the greatest baseball teams in the early 90s of baseball. Sadly, Toronto has never been the same since, but hopefully one day they will bring back the glory that used to be during those great times in the 90′s.